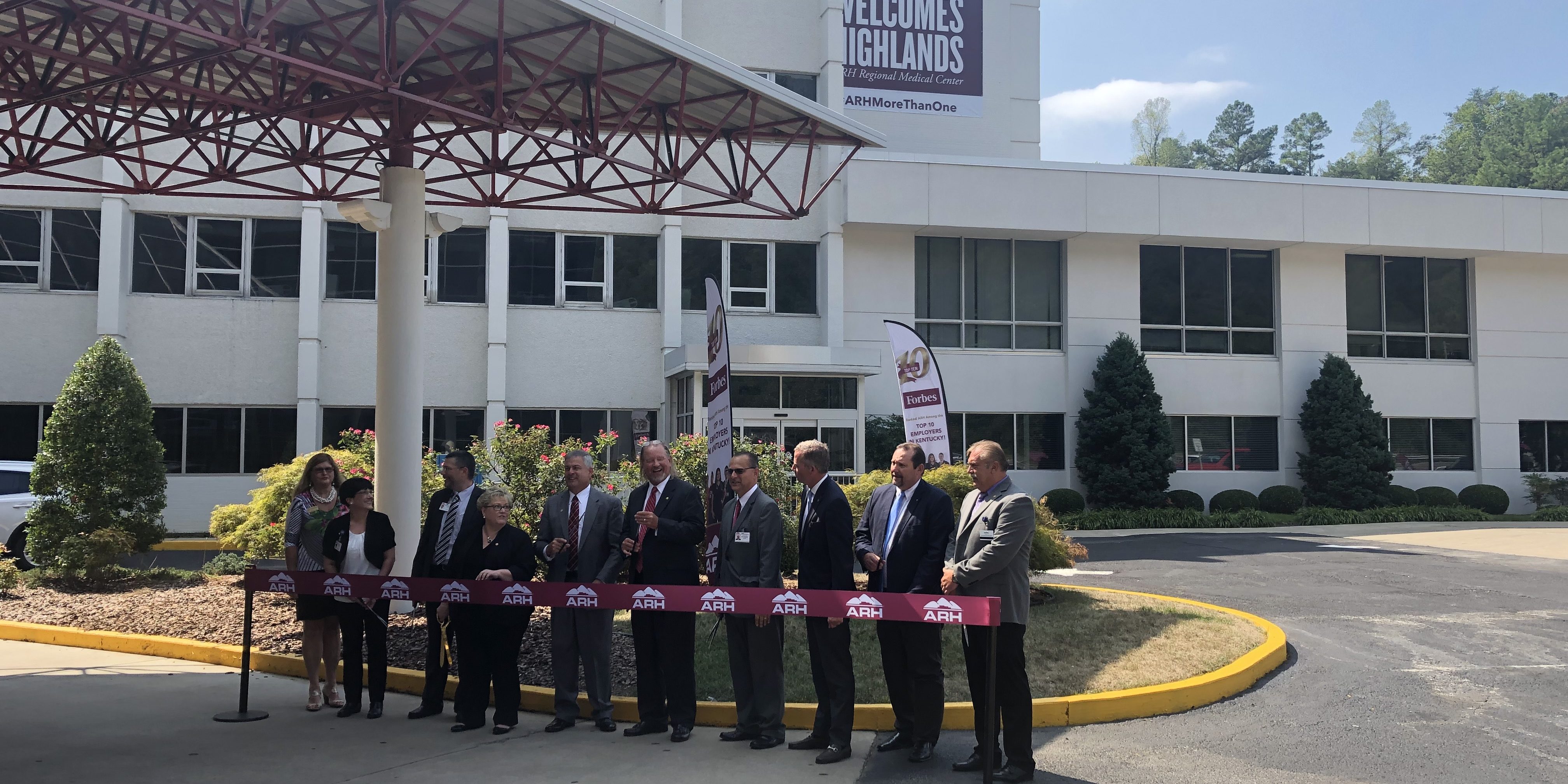 “Believe it or not,” he said to those gathered to help celebrate the occasion, “people ask me all the time if I have a favorite hospital. I always say that’s like asking a parent if they have a favorite child. The answer, of course, is no. They’re all part of the family and they each have different strengths they bring to the communities they serve.”

Grossman spoke of an RN he’d talked to a few days before. For nineteen years, she’d worked in several different units at the Highlands hospital and was now part of the team providing orthopedic care. It’s an area of excellence for the facility and one slated for rapid growth. “She told me that Highlands has always been a vital part of this community. ‘We don’t just provide healthcare to people,’ she said. ‘We treat family.’”

“That’s why I’m so delighted to welcome Highlands ARH Regional Medical Center to the ARH system,” Grossman continued. “It’s a special place full of dedicated professionals who are passionate about providing the highest quality of care to the communities they serve. Highlands brings its own personality and spirit to our family of hospitals and I couldn’t be more excited about that.”

ARH officially took operation of the Highlands facility on August 1, 2019, making it the 13th member of the ARH system, as well as its second largest facility. Only Hazard ARH Regional Medical Center is larger, with a total of 358-beds, several specialty clinics, and a home health program.

“Highlands will be a leader in providing community support,” Grossman said. “They already have health fairs, fitness programs, and a strong integration into the community. I think we’ll learn a lot from them.” 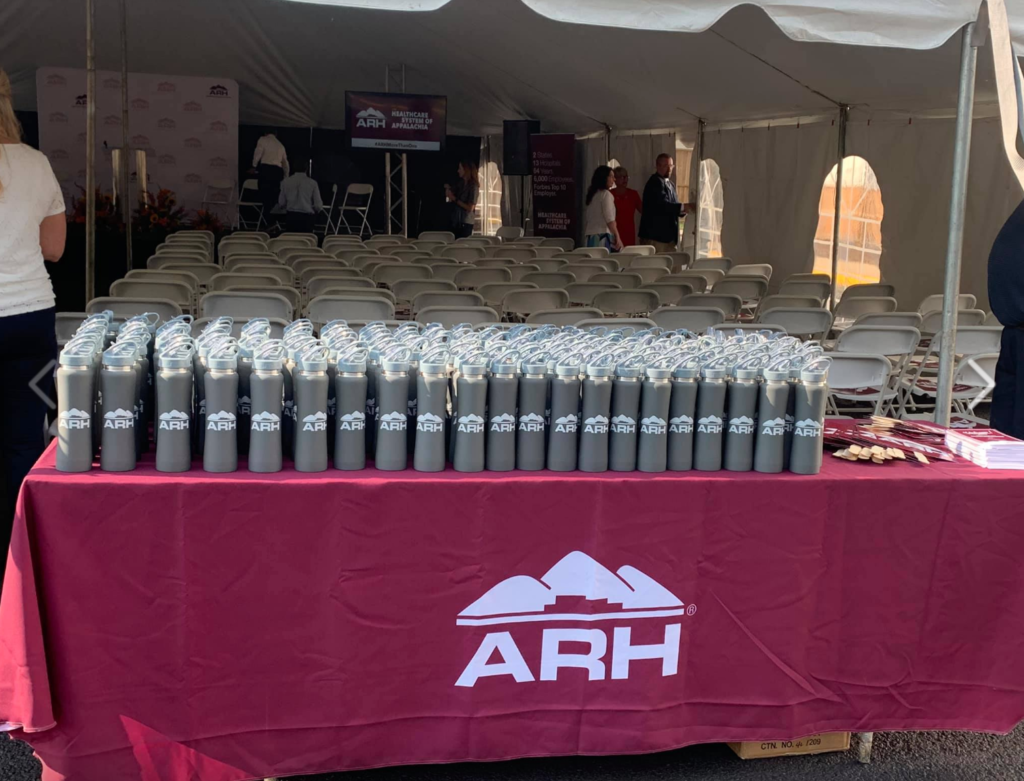 New ARH employees were given ARH logo gear to welcome them to the team.

Congressman Hal Rogers (L) serves as the US representative for Kentucky’s 3rd district and is a well-recognized face among the people of eastern and southern Kentucky. At the ribbon cutting he shook hands with new ARH employees and addressed the crowd. “Hospitals now account for the most economic impact in southern and eastern Kentucky,” Rogers said. “It’s no longer coal, lumber, or tobacco—it’s healthcare.” Rogers said that as the single largest employer in eastern Kentucky and the third largest private employer in southern West Virginia, “ARH is, without a doubt, the largest economic engine in the region.”

ARH drives an annual compensation of $330 million in the region, but the overall impact is likely much greater. According to the Rural Health Information Hub, it’s difficult to measure the total impact of a health system like ARH. That’s due in part to the grants and subsidies funneled through the health system and into the local economy.

Rogers said, “Coal is going to be around a long time and we’re going to support coal, but it’s not hiring as many people, and it’s getting worse,” he said. “ARH is leading the region in hiring and providing opportunities.”

ARH also supports the employment landscape in the region by providing scholarships and grants for medical education. “We have the opportunity to provide jobs for residents, and education is part of that,” said Grossman. “We’re proud to contribute in that way.” 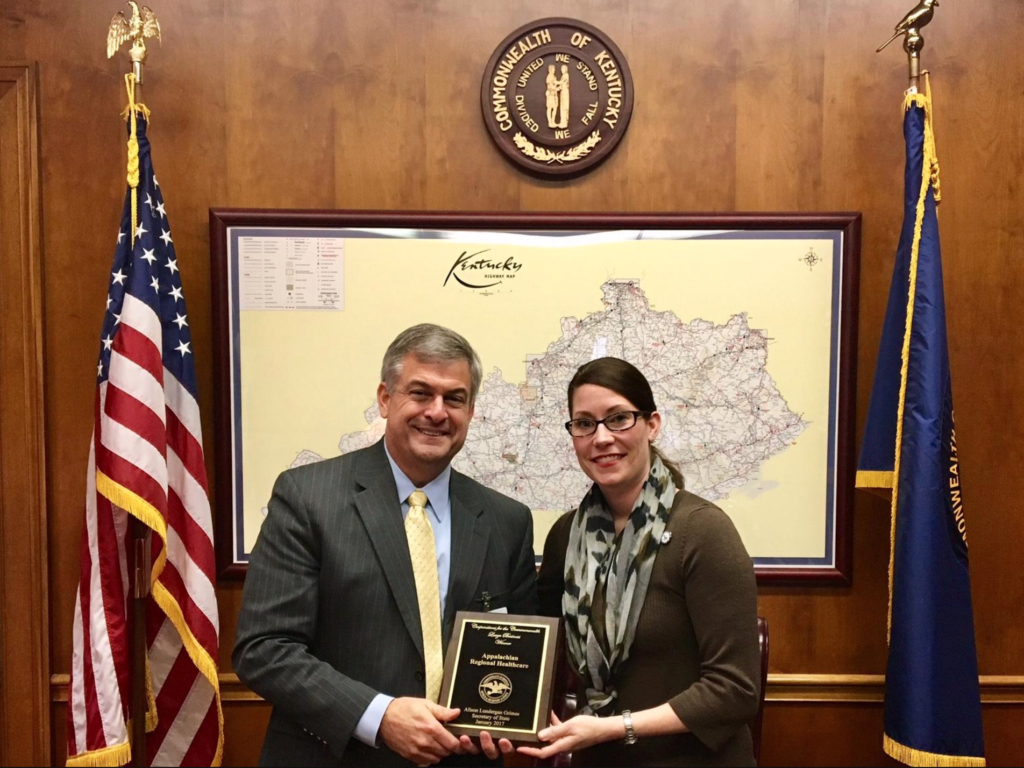 Joe Grossman, president and chief executive officer of ARH, accepted the
“Corporations for the Commonwealth” award, which annually recognizes one large and one
small company who provides substantial benefit to the communities they serve. The award was
presented by Secretary of State Alison Lundergan Grimes. Credit: Kentucky.gov

This year, Forbes Magazine named ARH as one of the top ten employers in Kentucky in a ranking based on salary, atmosphere, and working conditions. ARH and the University of Kentucky were the only two employers in the top ten who are headquartered in the Kentucky.

ARH has also been honored by the office of the Secretary of State with the “Corporations for the Commonwealth” award. The annual award was instituted in 2017 to recognize Kentucky businesses that demonstrate a commitment to giving and a drive to improve their region. ARH was the inaugural recipient.

“Appalachian Regional Healthcare (ARH) is one of those organizations that demonstrates exactly the type of engagement and investment we want to highlight,” said Secretary of State, Alison Lundergan Grimes. “ARH is dedicated to the region it serves, promoting the health and welfare of the people who live in its service area and beyond, by offering assistance to those who need it most.”

As ARH continues to thrive and expand, that dedication to community development and improving the health of the people it serves will only strengthen—and that’s an undertaking Grossman doesn’t take lightly.

“Family takes care of family,” he said. “That’s what ARH is all about.”